Today I received a call by a customer, followed by an email with the following pic. 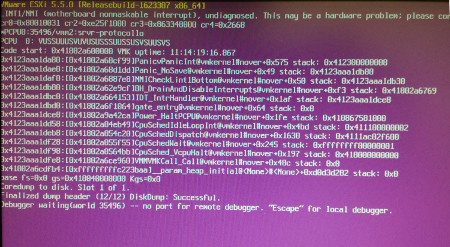 Remembering an article I read a few days ago on the Magnus Andersson (@magander3) blog, at first I thought of a problem caused by the HP HPSA driver 5.x.0.58-1.

Unfortunately I was wrong, but after a little search on the HP support center web site I found an update for the iLO 4 that solve the issue described on this advisory.

In rare instances, on a ProLiant Gen8-series server with HP Integrated Lights-Out 4 (iLO 4) Firmware Versions 1.30, 1.32, 1.40 or 1.50, intermittent Non-Maskable Interrupt (NMI) events may occur. After rebooting the server, the operating system loads properly and no additional impact to system operation will occur. HP has provided a permanent solution to this issue in an updated version of iLO 4 firmware, available for download at the following link http://www.hp.com/support/iLO4

If this issue occurs, the operating system will indicate that an NMI has happened; however, the specific indication will vary by OS:

No more PSOD after the iLO 4 firmware upgrade.

I'm currently working as a Solution Architect, Sr. System Engineer, Virtualization Specialist at RTC S.p.A. where I'm mainly focused in the design, implementation and support of the virtual infrastructures. My skills include storage, backup, disaster recovery, network and firewall.